Even after being a homeowner for 11 years things astonish me, like house-painting. The first year I was in this house, I repainted the living room three times because each time, I hated the color. Now it’s been the same for 10 years and I still love it to the point where I still think of it as “new.” So when I see cracks and chips I think “damn, it dogs. This is all your fault!” Some of the issues are 100% the fault of the dogs (I’m looking at you, Yogi) but then certain things just come with age. I personally felt like maybe I’m just a terrible person and trashed paint that should last a long time but then after doing extensive research (googling), I discovered that paint usually only lasts about 3-4 years in high traffic areas and 5-10 years in lower traffic areas. This was music to my years because I finally feel like I have permission to paint EVERYTHING in my house and just give it a refresh, especially after things falling into a state of disrepair last year. Initially, I decided that my painting days were over and I was going to hire someone to do it because it’s just easier. Then, I heard from friends how much house painting is these days and rethought my plan. Since I have most of the summer off, I decided this would be a great thing to focus on and save a lot of money in the process.  Here are my very real before pictures along with my “plans.”

This room was last painted in 2008. I still love the colors that originally came from two “oops” paint containers from Lowes that were sold for $3 each. I’m planning on keeping the colors the same but change the drapes and drapery rods. 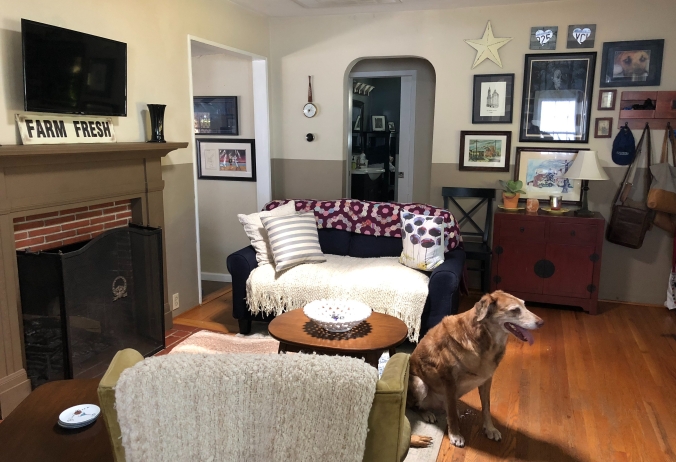 This room was painted in 2009 by the “guy” that did my bathroom. As I’ve stated before, I’m done hiring “guys.” Truthfully, I’ve always thought the paint job was awful in here second to only the terrible tile work in the shower. I have so many regrets in this room it’s not even funny, like the glass tile (hello last decade!) but I’m hoping that repainting the walls, possibly the vanity depending on how it looks, and installing new fixtures will make it look decent until the tile in the shower can be replaced.

I painted this room one night during the 4th of July weekend of 2012 and it turned out to be kind of a disaster.  There was a lot going on at the time, I adopted a new cat and was scheduled to have her come home on July 5th and at the same time, the washing machine had died. I decided that before the washer and dryer were delivered that I should redo the floors so I wouldn’t have to move the washer/dryer after it was installed. I thought I had more time to paint, but the tile guy said I had exactly one night to get it done before I couldn’t walk on it for a a day and in my crazy head, I couldn’t paint the room after the tile was in. Immediately when I put the color up I knew it was too blue but at 10 o’clock at night, I really didn’t care. I’m not sure exactly what I am going to paint it but it’s not going to be bright blue.

This room was painted all the way back in 2007 and it shows. The ceiling was patched that year and never painted. The curtains were clearance and the furniture in there is a total hodge podge. The room is dark, and I hope to lighten it up and more importantly, do some basic organization. I actually debated about showing it because I’m super embarrassed about the state it’s in.

The bedroom has been in a state of chaos since February when I bought a new mattress. Everything had to come off the walls because I went from a Queen to a California King bed, the photos were off center. I never put them back up because the walls needs a good painting. I like the color that I’ve had in there since 2010, but I’m not opposed to changing it. Here it is right now, with Yogi photobombing.

The den was actually painted in the past two years (go me!) but the woodwork needs a refresh. I have a quote for new windows as well but we will see if that comes to fruition or not this summer.

I hope you enjoyed my very embarrassing tour of my house. I usually take pride in it, but it really fell into disrepair and out of function in this last year. Some of it was deferred maintenance and some was some furniture that I acquired from my father’s storage unit just was “shoved” in places. I hope that the house will come back to life and I can take pride in it once again.