Cutting the cord is super popular these days and if you google it there are 80 million blogs telling you how to cut it. I’ve considered it, crunched the numbers and here is why I’ve decided to not cut the cord. I get why people do it and it totally works for some, but it just won’t work for me. I’m not going to lie even before binge watching was a thing, I loved TV. I didn’t grow up in a restricted TV household and so TV was a large part of my life growing up. Sure I played outside and had a normal childhood but for relaxation and entertainment? Yeah, I watched TV and I really don’t think it stunned my growth or caused issues, I feel like I’m a pretty functional adult.

I have a cable bill and it’s pretty big, here’s the breakdown:

My internet runs about another $40 a month but I don’t bother to include that in the total because that would be something I would have no matter what.

The cable bill itself doesn’t bother me and neither does the streaming bill but paying for double programing really bothers me and so I’ve been looking for years to see what I can eliminate. The best advice I’ve ever read on cutting the cord is you need to determine what your “must haves” are. Everyone is of course different but mine are the following: Local affiliates (for emergencies, news, MeTV and because quite frankly, I love a good high speed police chase), news (mostly CNN), the major networks, PBS, HGTV, AE, Bravo, TNT, AMC, and HBO.

The most problematic thing for me personally is the local affiliates. The major networks I can see the shows on Hulu or CBS All Access but the local affiliates (KTLA, MeTV, PBS) are non existent. At this point this is where you hear “just get an OTA antenna and pick up everything, it’s great!” I don’t doubt that in some areas this works like a charm but at least in Los Angeles, you typically need to have a decent view of Mt. Wilson to get the channels and my neighborhood seems to lack that. I’ve tried quite a few antennas and also surveyed my local Facebook groups and unfortunately due to the fact that Burbank is in a valley (like, literally THE VALLEY) and the proximity to the airport, it just doesn’t work. Even the FCC’s website pretty much says “good luck buddy” (orange means weak reception) when I enter my address. This in an of itself is a deal breaker for cord cutting but if I was going to give up extended cable I would keep the locals it would cost me an $48.99 a month (seriously) and remove my Internet discount from my bundle. 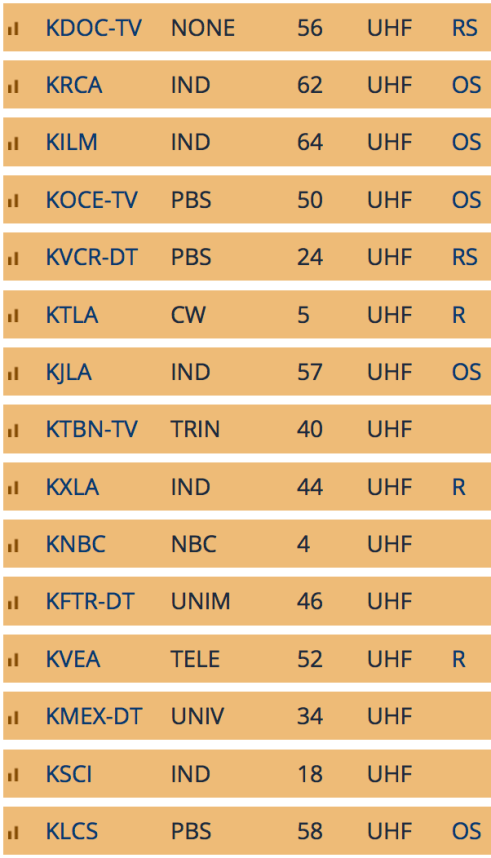 Moving on, for the other channels I would need something else because I do watch a lot of TV on my streaming boxes using my cable login. Hulu has quite a few but it’s not totally there. There a few a few options out there: Sling, PlayStatue Vue, YouTube TV and Direct TV Now that all run about the same price. There are about a million articles out there the break down each one and so I won’t bother to go into it here. There are even some nifty comparison charts that break down each channel by provider. It’s really all about your wants and needs. For me personally out of the bunch You Tube TV seems to be the weakest because it does not include CNN or any other Viacom networks. If you love YouTube this may be something that’s awesome for you, but it’s not for me. Sling and Playstation Vue both seem on par with each other in terms of pricing and channels although Sling does not have TLC which eliminates the Trading Spaces reboot. Both Playstation Vue and DirectTV now seem fine, but once again it depends on the actual channels you need. I also would need to subscribe to HBO Now which is an additional $14.99 a month.

If I were to “cord cut” here is what my expenses would be:

Okay so, it would be a money saver of about $20 a month and of course that is a lot of money (about $240 a year), I’m not convinced that the technology is quite there yet in terms of cloud storage and bandwidth. When 4K streaming becomes a thing, I may consider it. If I could get local affiliates on an antenna I would also consider it. All in all, cord cutting can be a huge money saver depending on your needs but there’s still no substitute in my opinion, that can give you everything with the ease that cable does.