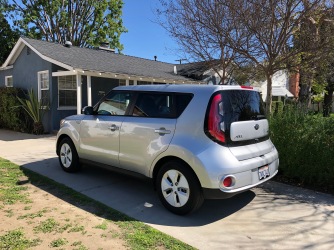 Yes, it’s true! Last week I said good-bye to my beloved “Silver Pine Mica” Prius with the Apple stickers on it.  At almost 170,000 miles it was time. Overall mechanically there was nothing huge wrong with it but there were a lot of little things that one would expect from a car with that much mileage and they were adding up: The AC wasn’t as strong as it used to be, a remote was funky, the car was dogged and most importantly the battery warranty was long expired and it was only a matter of time before that went. I’ve been looking at EVs for sometime, actually, I’ve wanted one since I watched  Who Killed The Electric Car? but during the time when I needed a new car in 2007 EVs were pretty much dead.

On March 24th, I attended an event sponsored by Burbank, Glendale and Pasadena Water and Power companies called an Electric Car Test Drive. It was what it sounds like, you could see and tour different electric cars without the sales pitch and get real hands on experience. The test drive in and of itself was great, I was able to test drive two cars, a Chevy Bolt and a Tesla Model 3 and sit in a Nissan Leaf. Obviously, the Model 3 was amazing and gorgeous and all I ever wanted in a car but then reality hits, and reality is not fun. The Model 3 is at least 1-2 years off and I needed a car like yesterday. Initially I thought either the Chevy Volt/Bolt was going to be the car for me but it has a weird cupholder thing in the back which would not work in the off chance I had to haul around all of the dogs. Visions of dog paws getting caught and breaking were too much and I was also put off by the fact that the actual electric range was only 23 miles on the Volt (the rest was gas). I also considered the Nissan Leaf which I actually test drove later that day at a dealership and liked a lot. My issue with the Leaf is that I knew that because I have dogs and as much as I want a dog free car, there are times when a dog is going to end up in the car and therefore I wanted a preowned one rather than new. The Nissan Leaf until 2016 only had an 84 mile range which in reality was a 50-60 mile range when you include real life driving, climate, radio, etc. For local commuting that was fine but I felt like I wanted more. I go down to Orange County a lot and I didn’t want range anxiety or to feel like I was completely screwed if I didn’t find a plug. The interior while nice, also had a few quirks that I wasn’t a fan of including kind of a funky backseat. (Apparently backseats are a huge issue with cars for me). All in all, I felt like with either the Volt or Leaf I was going to be giving up an awesome fully paid for car (my Prius) and getting something just okay in return. Thankfully on a whim I decided to google something like “EVs with the best range.” The top few were Tesla (naturally) but after that came the Kia Soul EV. I had no idea that the Kia Soul even came in an EV but the more I read about it, the more I was impressed. The back was spacious like the Prius and had all of the bells and whistles including Apple CarPlay. The range also was unparalleled at 104 miles and by all accounts it held up pretty true to it. By the time I was finished I had read countless articles and watched a bunch of you tube videos. I knew that unless there was something awful with it when I test drove, this was my car.

So, how did I find one? Since the Kia Soul has only been out since 2015 used ones are not as plentiful as Leafs or Volts but they are out there. I wanted one with decently low mileage and I also felt more comfortable buying from a dealer or a Carmax type place instead of some used car lot called LOW COST AUTO EXCHANGEZ or something like that. I finally found one I liked with a company called Shift. Their big sell is that they are no haggle like Carmax sans the douchy salespeople and they bring the test drive to you. Their reviews were pretty decent and so I went ahead and booked a test drive for the next day. Before my appointment someone called me from their office me to give me an estimate on my Prius in terms of trade in. On a side note, yes I know I could get more selling the Prius myself but I didn’t want to deal with it, not with that car. My experience was pretty much like it was advertised, a “Car Enthusiast” showed up with the Kia Soul, we went on a test drive and he kicked the tires around on my Prius. The price they had given me on the phone was substantially higher because it was for a Prius of that year in pristine condition with low mileage. Mine was… not. The actual trade in price was slightly higher than the trade in KBB price and more in line with what I actually thought I would get. I think like with all things, it’s all about expectations. After I agreed to buy the car my “car enthusiast” mashed a few things on his iPad and within an hour I was the owner of a Kia Soul EV (and a car payment) and he drove away in my Prius. Pretty nifty if you ask me!

So far, life with an EV has been pretty good! I’m loving driving a nice car and I’ve quickly gotten over any range anxiety I had. On Saturday I drove the car down to Anaheim (From Burbank) and then to Newport Beach. When I was leaving Newport Beach, I still had about 45 miles which was enough to get home but since traffic was heavy I decided to charge up at a Level 3 Charger in Irvine just to be safe. So far I’ve been able to charge up every night with the normal home charger (110V) but am in the planning stages of buying a level 2 (240v) charger soon. I’m sure I’ll blog more about my life with an EV and was super excited to give you all this update!