On a personal side note, before I write about what I was going to write about today, if anyone has any tips for getting rid of laryngitis please let me know. My voice went totally out last night and I’m freaking out about it not being healed before the Ridgebacks & Friends San Diego Yardsale on Saturday. I’ve been guzzling hot tea, but am practically willing to eat Tide Pods if someone were to tell me if it would help. (Seriously, I don’t condone eating Tide Pods, don’t send me hate mail).

This last week, I almost wasted about $100 on what would have been a really critical, dumb, error all because of a lightbulb. When my house was purchased in 2007, most of the lighting in it was really weird. The living room had no lighting and like two outlets, the front outdoor lights were operated by a big green, funky dial and the light over by driveway in the backyard was on a motion sensor that only worked when it felt like it. All of the weird lighting issues have been solved except for the weird backyard driveway light. I always knew it was there and a problem that only really presented itself as a problem when there was activity in the driveway late at night. I love the idea of a motion sensor, when it works. This motion sensor light did not work. It would sometimes go on when you opened the door and sometimes would stay on and then sometimes go off right away. No matter how much I tried, I could not figure out what would trip it. This would present problems during times when I was in the driveway at night selling a dishwasher on Craigslist or sorting stuff for the Ridgebacks & Friends yardsale.

Last year our yardsale was pre daylight savings time and so we (my rescue partners and I) lost the natural light halfway through our sorting. The motion sensor light was acting super quirky and so we had to bring out several of my lamps to light my driveway. Naturally, I knocked one over and then had to clean up glass. I swore I would get it fixed before the next sale. The year came and went and the weird light still remained. Finally, it was 2.5 weeks until the sale and I knew something HAD to be done. I was not going to deal with the embarrassment of that dang light again. My plan was to buy a new light that was not connected to a motion sensor and hire someone on Task Rabbit because electrical work scares me a bit. Great plan, right? I was literally at my computer, set to order and book and then I realized a super small detail… In 11 years, I had never actually looked at the light up close. I didn’t know how big the base needed to be or how the light mounted. Obviously, these are critical things to know and I’m sure you can see where this is going, well before I did. I drag out the BIG latter (because I’m short), and finally get up there. What do I discover? The motion sensor is actually a screw in thing that acts as a bypass. Unscrew it, and the light acts normal. Well, damn. On one side, I’m happy that I saved upwards of $100, on the flip side, 11 years of this nonsense. ‘Nuff said. 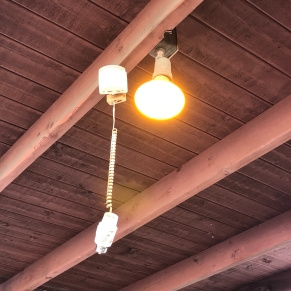 The light with the motion sensor unscrewed, sigh.

When stupid stuff like this happens I try to take it as a learning experience. I have a tendency to jump to conclusions and always assume the worst. It’s something that I’m always working on but I think it really showed in this instance. I just assumed that this light was going to be a big issue and so I avoided it and jumped to the complex solution before looking at all the options. In the meantime, tell me about your house flubs!