I want to say first and foremost, I’m not a decor money saving guru. My home projects typically run on budget because I’m a planner by nature but I do not think of myself as someone that gets screaming deals. This is mostly because I’m at the point in home ownership where I refuse to hire “guys” to do stuff. You and I both know the type, they can do a little bit of everything but never show up on time and the project takes twice as long as it should and probably costs more in the long run. I used to hire a “guy” for everything, now I either do it myself or hire a pro, meaning if I need a fence, I hire a fence guy, if I need plumbing I hire a plumber. I refuse to deal with jack of all trades, master of none unless it’s something REALLY small. It’s just not worth the hassle. With all that being said, I feel like I have to brag for a minute on the overall cost of my backyard remodel so far. There’s no denying it, my backyard looked SAD!

When my house was purchased in 2007 the backyard was super lush and nice with a beautiful lawn. Unfortunately the sellers had recently put in the sod to make the house look more appealing. It didn’t exactly die quickly but it never looked great and always had weeds. Fast forward 10 years to my really bad summer/fall this last year, I was so out of it physically and emotionally, I forgot to water my backyard. During the summer. In Southern California. Oops. Needless to say, by the time November rolled around, I had a crispy backyard with no grass which made me really sad.  I want nice grass, I want something pretty to look at and to not cringe when I look out my den window. I was actually planning on having my backyard redone before the holiday season but, I was hit with major expenses in October (both cars needing work and $2000 worth of tree trimming) and so my backyard renovation was put on hold which actually turned out to be a good thing.

The last weekend in January I happened to be at OSH killing time before getting a haircut in the area and I came across a display of Marathon grass seed. Suddenly, I had an epiphany that I was going DIY grass seed instead of doing sod. I had done it 10 years ago in my front yard and while it was doable, it was kind of a pain. Spreading the seed itself isn’t that labor intensive but the prep work and the smell of manure is THE WORST. I think by now I had rose colored glasses on the whole thing and had forgotten how bad it really was because, the price savings alone sold me on it. I bought the grass seed on the spot and now had plans for the next couple of weekends. The remainder of that Saturday was spent tilling the yard and digging up stray roots. My initial thought process for this project was to do the backyard in phases so that it would not be overwhelming physically and financially. Phase one would be to put grass seed down now so my yard would not look like a giant mud pit for the annual Ridgebacks & Friends Rescue yardsale at my house in March and also so Squirt the Tortoise would have a lush lawn to munch on this summer. Then later, when time and budget allowed I would do flagstone paths in obvious spots where grass would not grow.

This is where I ran into a bit of good luck. Around 9PM that Saturday night after a long day of tilling I had the crazy idea to look at Craigslist for rocks and flagstones. There were a few people giving them away for free but they wanted you to dig them up, no thank you I’m not doing your construction job, Then there were the people selling an entire pallet for $50 off the regular price, nope again. If I’m going to schlep flagstones in and out of my van I want real savings. If I’m going to end up paying full price for something, it’s coming to my house and being dropped in my driveway. My time is money. Somehow, I accidentally navigated to the Orange County craigslist and found it: the amount of flagstones I needed, in a color that was acceptable for $100. (These flagstones would probably be around $500-$700). Someone had purchased two pallets to get big stones and then wanted to get rid of the smaller stones. I happen to love the look of small flagstones because I think it looks more natural and charming, like something has been there for the ages. I immediately e-mailed the seller and imagined that there would be a lot of people e-mailing, so I tried to sell myself and not sound not flaky and totally normal so that I would get “picked.” “I promise I will show up!” “I have help and a van!” “Call me!” I don’t know about anyone else, but when I’m not trying to sound creepy I come off as creepy and so I was pretty shocked and elated when they asked if I could come at 8AM the next morning. When I got there, they were pretty stoked that I didn’t haggle on price and I was excited that they had everything in the driveway and I could pull my van up. It was truly a no hassle Craigslist experience. This was the end result. 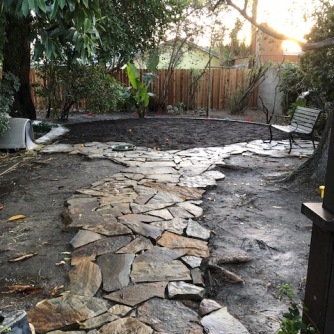 The next weekend was the part I had been dreading, laying the grass seed putting down steer manure. Ten years ago when I first put grass seed down in the front yard a local now defunct nursery (Sherdian Gardens in Burbank, sniff sniff) told me to ignore everything on the marathon seed container and do the following: put down the grass seed and then coat it with an inch of steer manure and water it three times a day. Since it worked the first time I decided to go with their advice again. This time however, there is a 90 pound problem named Squirt the bulldozer tortoise that I didn’t have to contend with last time. There really is no way to keep him out of the area that’s going to be seeded so I decided to do 2-3 inches just to make sure that he didn’t dig up the seed while he’s patrolling the yard and watered it for 15 minutes, three times a day to really let the water sink in. Needless to say, I bought a LOT of steer manure (23 bags to be exact) and received several comments from people at Lowes. The cashier even asked me how much I exactly needed because she was sure I was overbuying. (Nope, I only had a bag to spare!) To answer the obvious questions, yes my van and yard smelled awful and my water bill was insane (normally $20-30 this time of year was $80). I’m pretty surprised I did not get a nasty note or e-mail from Burbank Water and Power. I also wanted to mention that there was 4 days of rain in the forecast that I was hoping would provide a nice, natural water. Sadly, the rain only came overnight one time and the majority of the watering was my sprinklers.

According to the directions it takes 10-14 days for Marathon seed to begin sprouting. Since it was put down on February 4th, I expected to start seeing stuff right around Valentine’s Day plus a few days. On the 13th I woke up to sprouts in my yard that had seemingly popped up overnight! As of this post, 17 days after seeding, the yard is at about 70% and I’m thrilled. I don’t expect a perfect lawn, especially with three dogs but I’m so happy Squirt the Tortoise has lots of grass to choose from and that I can look out my den and see mostly green. I’m going to give it a another week and then do some patch work. 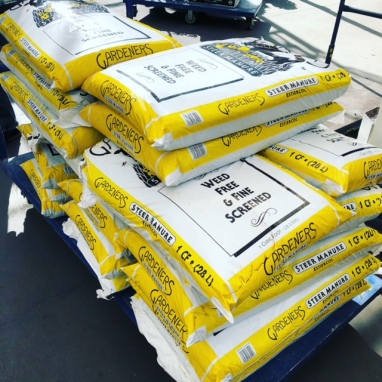 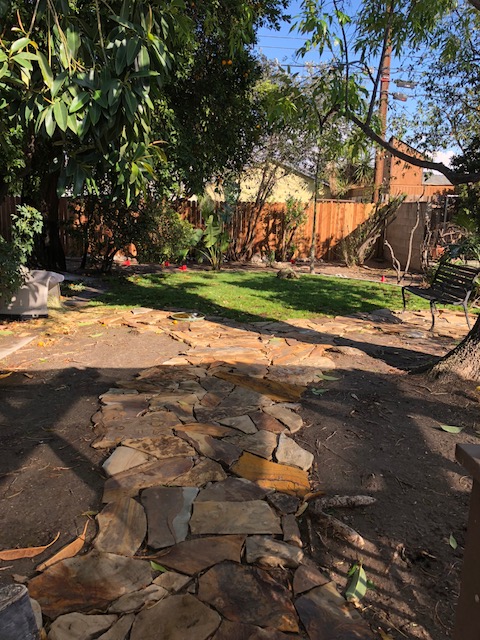 Since I’m mostly done with the multiple times daily watering, I’m planning on putting in native plants this weekend on both sides to add some dimension and color. As much as I wanted to do it ASAP, I know it would be better for the plants to wait because native plants can be overwatered even when being established.

So to recap, here are my costs so far:

Shenandoah Craigslist Flagstone: $100 (and to be fair about $25 worth of gas driving to OC and back)

Sprinkler Parts because I was clumsy, tripped and snapped a head: $5

Humiliation of having to go back to Lowes smelling like Steer Manure to get said sprinkler parts: priceless.