Last week I had a friendship blind date of sorts, I met someone that I didn’t really know for dinner. About six months ago I posted in the City of Burbank Facebook group looking for a recommendation for a fence company. One individual messaged me with a recommendation and sent me some pictures of her fence. We got to talking and we eventually friended each other on Facebook. We commented on each other’s status and met officially by chance at a Burbank Coordinating Council meeting. Since the holiday season is over and things have settled down, we decided to meet for dinner at The Hanger Grille on Magnolia Blvd (which by the way is delicious!) All in all we had a fantastic time and will hopefully get together soon.

This isn’t the first time I’ve met people this way. About ten years ago I signed up for a now defunct couponing website, “The Grocery Game” and joined their message boards. Eventually with the Facebook revolution a bunch of the “regulars” and I friended each other on Facebook and had a local meet-up. One of the people from that message board actually lives in Burbank and has become a close friend to the point where I go to her house for Thanksgiving almost every year. If it wasn’t for this message board, we probably would never have met. We don’t live in the same neighborhood or run in the same circles. She has kids and I do not and the only thing that brought us together was a love scoring deals with coupons. In October of 2011 another person I befriended happened to be traveling to Texas from New York for business and decided to meet up with a bunch of the people from the message board who live there. A few other people and I found a good deal on airfare and decided to join for a girls weekend. Four of us came from the west coast, and a couple from the East Coast and we all had a fun weekend. (This was when I had super short hair) Before that weekend I had only met one person in that picture. Now I’ve traveled with some of them a few times. 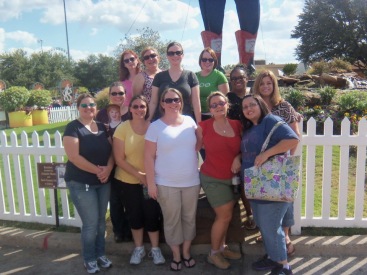 I really do think online and through social media  is the new way that people make friends. it brings unlikely people together with a common interest that they may not find organically. Thinking back,  I think the last time I made a true friend that didn’t start out online was probably 2010ish and that was through work. Before that it was friends I made in college and in high school/grade school in Chicago. Are they good friends? Yes. Are they friends that would fly to Chicago from Atlanta to help me have an estate sale at my father’s house? Probably not but that’s really the only kind of once in a lifetime childhood friend that would do that and I don’t know if that could ever be found online. Here is my BFF from junior high and beyond Carolyn and I acting like we are teenagers in my dad’s basement making fun of a bunch of 90s flip phones and pagers we found. Why was I dressed up and she was in casual clothes? It’s seriously the nature of our friendship.

Anyone else met friends online? How do you meet people today? Drop me a line and let me know, I’m curious.