On Thursday night, I received a Facebook message from a stranger whom I purchased some Pyrex from off of my local Buy/Sell/Swap Facebook page last month. She still had a few pieces leftover from her onslaught of buyers and wanted to know if I wanted to take a look at the remaining pieces and buy them for $2 and $5 if anything grabbed my attention. I’m not a Pyrex  collector by any means but I like the look of it in my dining room so I immediately said “heck yeah!” I jokingly said when I posted a picture online of my last haul from her that I was getting my 1970s housewife on. Today was no different. My apologies to my father whom I spent the better part of the 90/00s mocking 70s decor to. He’s totally getting the last laugh here. I really didn’t have a plan in mind when I bought the stuff but somehow it all worked out pretty well on one of the built ins in my dining room. 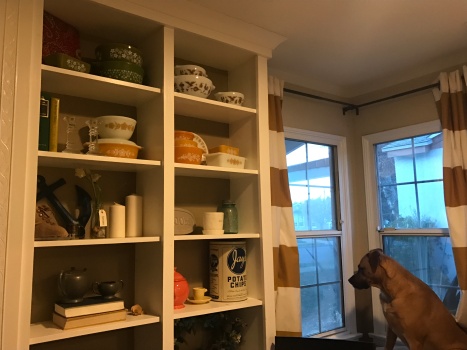 For whatever reason this sparked something in me and I decided to drag out my sewing machine and sew a valance that I’ve been wanting to put in my kitchen for two years now. Of course, the one time I decided to drag out the machine in years it decided to have it’s reoccurring problem of eating bobbins again so I used iron on tape instead. The result wasn’t 100% awesome, but it’s better than the curtain rod without fabric I had hanging there for 2+ years.

I also with some of the leftover fabric decided to make a cover with velcro for the unused water lines in my laundry room… I feel like I owe a bit of an explanation for this. It’s not some random house quirk that I can blame the previous owners on (10 years later I still do that), it’s kind of my fault. When the house was first purchased, the washer and dryer were on opposite walls with a microwave hanging on a suspended shelf on the ceiling over the dryer. I so wish I had taken a picture of this because it was really bizarre. When I decided to upgrade to a front loader set, I decided to stack  the washer and dryer so that I could have more space for storage, a built in ironing board and so the dog could have a dedicated eating space. This was when there was only had one dog, oh how times have changed! Long story short, this left very unsightly washer hookups on the opposite side of the stacked set where the washing machine used to be. Instead of caping the lines and filling in the hole I decided to leave them “just in case.” I figured it would be good for the future and to give future owners many, many, many years from now flexibility. In my mind this is perceived added value but I know it’s not really true. Instead of installing some cool door to hide the lines or even running to Home Depot and buying one of the plastic covers I let it sit for five years, unsuccessfully covering it with a hanging duster and dryer brush. Finally I have a little cover made from a bubble mailer, fabric and a glue gun. I would have used plywood but that required a trip to the store and the lazy factor set in. Classy huh? But it worked and it’s better than what was there before. Or at least I think so. 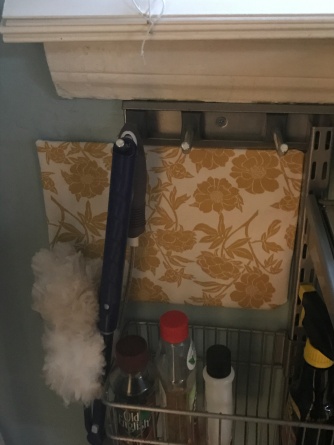